skip to main | skip to sidebar

The North Pole is melting, Santa is sick is in the elf hospital, the polar elves can’t make toys in their melting work stations, the reindeer have deer mites and are too itchy to fly; so who always fixes these Christmas disasters? That’s right—Sara Claus. Sara Claus is a 17,000-word chapter book geared towards children ages 6-10 will help confirm the rumor that Mrs. Claus is not just a sweet, white-haired grandmother figure, but an energetic executive CEO, who gracefully runs the North Pole by computer with one hand and bakes cookies with the other.

Sarah is the gentle executive glue holding the North Pole together and can trouble-shoot any polar emergency. Summoning her favorite forest wood elves to build toys deep in the forests of the world, she commands leagues of flying pink pigs to deliver the toys with three elves to a coach. Even with the additional help of deputized mall Santas and mall Saras, delivering the massive load of gifts before 5 am on Christmas morning will be the feat of a lifetime. Sara Claus is a book that brings Christmas to every household worldwide and not just in a remote region called the North Pole.
Posted by DrSpalding at 10:14 PM No comments:

Read the book, Sara Claus and find out how Christmas at the North Pole is really run by a woman as it is in most households.
Posted by DrSpalding at 9:25 PM No comments:

Why I wrote the Book Sara Claus- Humorous

Why did I write my book, Sara Claus during Christmas Vacation?

Well, it was timing mostly. I was in Lowe’s Hardware Store with my wife Thanksgiving night 8:30pm of this year to buy our annual Fraser fir Christmas tree. My wife then looks up to a high a shelf and saw a 3 foot pink wire reinforced flying pig sporting white electric flapping wings and a green Christmas wreath covered in white led lights.

Well, my wife had to have it. I tried to my best to give her a 100 reasons we didn’t need it when another couple came up from behind and bought the last one, a display model. Now, I was in the dog house. All my reasons for not purchasing it were just countered instantaneously.

To save face, I had to get immediately on the cell phone and try to locate another flying pig at another nearby Lowe’s store. No luck finding one locally of course. I do locate one an hour away, buy it over the phone for $50 with my debit card and make plans with the clerk to drive the next day (on Black Friday). I had to arrive at 5am the next morning as the store opens for the early bird droppings or shoppers I should say.

If you never have been to a black Friday sale, you have to do it once in your life. It’s a like pulling the fire alarm at a psychiatric hospital during dinner time. Nut jobs are running everywhere. Rush, rush, run, run and grabbing anything. Ok, now I own a flying pig in a box to be assembled of course. I get home, open it, dump all the parts out on the gravel driveway and start to assemble it like any man - without reading the instructions.

Things don’t go well. This thing is cheaply manufactured, but the metal is strong, I can’t bend it into shape and I surmise it is designed way off on all the tolerances. Then I start over, I read the instructions and things get better. Ok, done. To please my wife, I take the completed flying pig inside to plug in and put it next to the non-decorated standing Christmas tree I drug in the house the previous night. I plug it in, the white led lights come on and the wings slowly move up and down. I expect to be on her good list now.

My wife looks at the pig and then says she is afraid that it is going to get stolen and she said “DO NOT put it outside”. She states, “it will stay right where it is”. Now, we live in a very average house. Putting up the live Christmas he tree is a big deal every year and now I have to look at a large 3.5 foot pink flying pig with white flapping light up like a flashing Las Vegas BBQ sign in the living area for the entire holiday season. I bit my tongue this time as I was hoping she would change her mind.

After three days of looking at this pig I say to myself, “there has to be a story about this somewhere in my head somewhere”. Like any holiday where you watch too much TV, seeing a few discovery channels professing the north pole is melting, this story starts to develop. While drinking Vernor’s ginger ale which has a small elf picture on the bottle (that I later come to find out is really a cousin of an elf or “Gnome” named “Woody” for real), I see a commercial with a lady dressed as Santa’s wife. I said to myself, what would her name really be, when I said to myself, “Sara”. I thought, “Sara and Santa”. That has a ring to it. The book jumped out from there.

Of course, I had to incapacitate Santa with the flu because some doctor in England recently said Santa was in “bad taste” for children to actually respect because he was fat, out of shape, probably had diabetes like too many obese Americans and was not a good role model for children. See http://www.medicinenet.com/script/main/art.asp?articlekey=109527 I am not making this up. Ain’t that something? Santa is going to get replaced by a “healthier” lean person like Obama who smokes cigarettes. Hey, and you got to get rid of the reindeers with deer mites for a bit of time as well or you can’t have flying pigs replace them. Ten chapters later and my children’s book is finished.

All in all, I have a now have a new book called Sara Claus that you can order at, yes, you got it, I bought a domain called www.SaraClaus.com . You just never know what happens when your wife makes you buy a flying pig for Christmas.

Thank you honey, what do you want to buy next year?
Posted by DrSpalding at 6:02 PM No comments:

The web site wwwfufufactory.com is now refreshed.
Posted by DrSpalding at 4:04 PM No comments:

The web site www.SaraClaus.com is now working to read the first two Chapters
Posted by DrSpalding at 4:02 PM No comments: 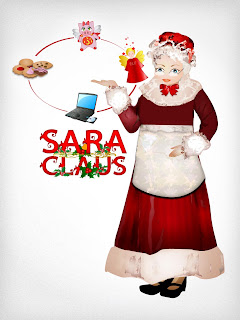 This is the first blog post for the book, Sara Claus which I hope be the start of a series of comments and suggestions for the readers.
Posted by DrSpalding at 12:38 PM No comments:

DrSpalding
Chattanooga, Tennessee, United States
I am a podiatrist who enjoys writing various news worthly books and children's picture/chapter books. I can be reached at 423-756-3668